Fixing the timing on an overlocker (serger)

Like Lorna at http://bangerlm.blogspot.co.uk/2007/01/do-it-yourself-serger-how-to.html I did something unspeakable to my overlocker.

While happily sewing away the other day, there was a crunch which resulted in the right needle breaking.  The needle had come down right on top of the metal hook that sits in front of the lower looper in my machine.  For the record, it's a Frister+Rossman Euro-Lock 4DS MkIII, but I believe many other models are very similar. 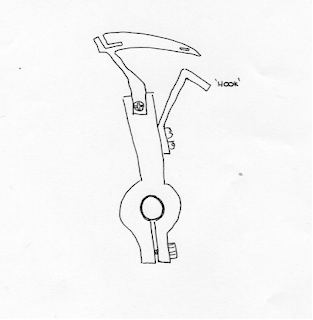 I have no idea why this happened, and like Lorna I found precious little help online.  There was lots of general information about buying and using sergers, but as far as servicing guidance was concerned, very little.

As I have said before, marrying an engineer has its benefits.  Not one to be beaten by a mere lump of metal, mine eagerly took up the challenge and identified four potential problem areas which we have indicated in the diagram below: 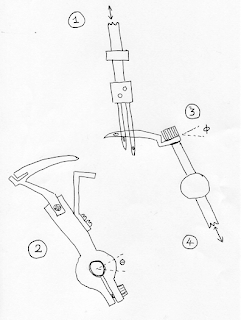 1. The needle position in relation to the loopers might have shifted.  Maybe the wheel which drives the needle up/down had slipped on its shaft.

2. The depth of the lower looper arm on its shaft seemed to be much less than might have been expected.  Additionally, there is the angle (theta) by which the arm might have rotated from its correct position.

3. There is the angle (phi) by which the upper looper might have rotated from its correct position.  This would determine the separation between the upper looper and the needles as they pass each other.

The innards of the machine appeared to be pretty robust, so options 1 and 4 were set aside, at least for the moment.

Options 2 and 3 each had possible sources of mis-alignment.  In the case of 2 the angle (theta) is critical, as is the depth of the arm on the shaft.  Either of these could explain why the right needle hit the hook.  So, we slackened off the nut that secures the arm to the shaft and tried it in various positions without success. 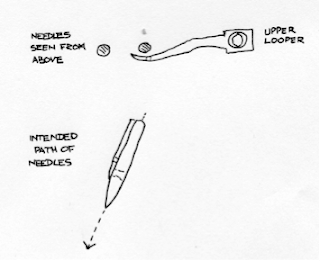 While the lower looper arm was so loose that it was completely 'out-of-play' we observed the interaction between the upper looper and the needles and here we found what appeared to be the entire cause of the fault.  The drawings below show what happened as the upper looper moved across the needles.  So close was it to the needles that as it continued its journey the back of the looper bent the needles so that the needle on the right hit the hook as it went through the face-plate. 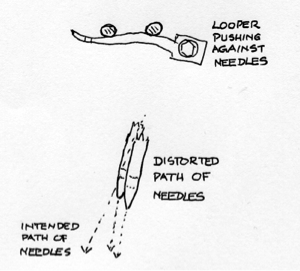 Slacking off the bolt on the top of the upper looper shaft and drawing the looper slightly away from the needles completely solved the original problem, but the timing was now completely out.

We now got some help from http://www.ehow.com/how_12183068_adjust-serger-timing-lock.html but what was even more useful was an excellent little video at http://www.youtube.com/watch?v=JpVe0e009vE

The creator of this video takes two scenarios.  In the first instance, she considers the positions of the loopers when the needles are at top dead centre.  By luck the inside of her machine looked just like ours and it was immediately clear that the upper looper was in its correct position.  As you turn the handle towards you the needles start to move down and the upper looper starts to cross them.  As recommended in the eHow reference the distance between the needles and the looper was set at about 1mm.  This is shown in the photograph below. 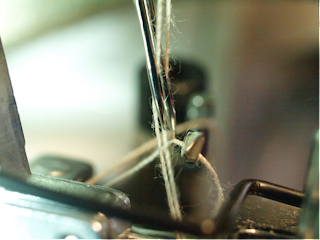 The second step in the video considers where the lower looper should be when the needles are at bottom dead centre.  Initially we set it to the right of the position that was recommended.  This worked fine for three thread operation (left needle removed).  However, it did not work at all when all four threads were used. Success came only when we rotated the arm so that the back of the looper was in the position relative to the cutter depth control shown in the next photograph. 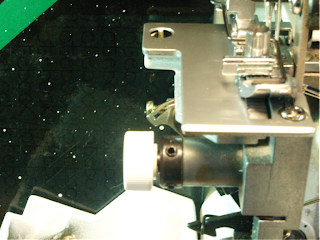 At the same time we were attempting to optimise the depth of the lower looper arm on its shaft.  There are various factors here.  One concerns the way in which the hook on the looper arm restrains the needles when they are fully down.  The apparent purpose of the 'hook' on the lower looper arm can be seen in the photograph below.   The needles are temporarily trapped so that they don't move when the dogs move the cloth.  If the arm is too far out along the shaft then it will foul the feed-dog support.  If it is too far in then the loopers will foul each other.  At one point we thought that we had got everything positioned correctly, but once the overlocker was running we could hear the loopers clicking against each other, so the depth of the arm on the shaft had to be eased off slightly before the locking bolt was tightened. 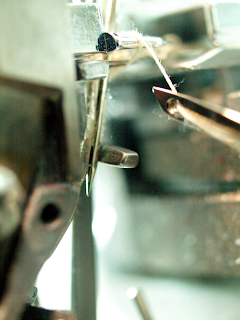 At last we had the machine running perfectly, probably better than it ever had before.  Long may it remain so!
Posted by Dorcas at 04:52

Hi. I think you are brilliant!!! Do you have other posts?

Thanks so much for this. Not sure if it will actually fix things--timing issue is a bear--but at least I know what I am looking at and trying before throwing the thing at a wall!!

It supports both single and dual switch access through direct access using the two built-in switches, or plug in your favorite switches into the available ports to fit your individual needs. Locksmith near me

Hi
I have a singer overlocker. Upper and lower loopers are meeting each other. I need advice yo fix it